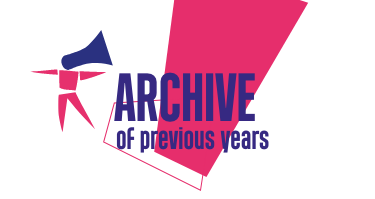 The programme of the third edition was varied and enticing. As the topic of the festival was unfreedom, we lived for three days with the slogan Let responsibility for freedom be well heard.

Premieres introduced for the first time in Slovakia

The Primitives (BE)
THREE OF A KIND

The programme of the third edition was varied and enticing. As the topic of the festival was unfreedom, or the anniversary of the infamous 1968 occupation, respectively, we invited the Slovak National Theatre with their CABARET NORMALIZATION a.k.a. A Prayer for Marta about the popular Czech singer and freedom-fighter Marta Kubišová.

A new literary production by the young generation found its way to the festival in the form of the program NO FREEDOM, NO FUN, performed by a group of unconventional speakers D´byt dženerejšn.

The festival hosted 90 artists from 9 countries in 33 productions, culminating in the discussion WITNESSES TO TYRANNT, hosted by Mirek Tóda. The guests shared their authentic personal experiences of the occupations of their respective countries, featuring Csaba Gy Kiss (HU), Jaroslava Šiktancová (CZ), Andrzej Jagodziński (PL) and the Ukrainian-Slovak actor Jevgenij Libezňuk, who also read excerpts from the book ON TYRANNY by T. Snyder. The concert by the Hungarian street band Csángálló in Art Café had a tremendous success among the viewers and played all night until the morning. Due to popular demand, we organized 4 reprises of the retro-bus trip experience EXCURSION TO (UN)FREEDOM and the mobile exhibition of cartoons DEADHEADS. The series of installations by Dušan Krnáč was completed by the Film Exclamation point, playing authentic footage from 1968. On the terrace of Art Cafe, we gave away three AMPLION ARGENTUM awards. It was given to the cabaret play that many viewers fell in love with, FUNERAL FEAST by Studio Damúza & Fekete Seretlek. The street art category was won by the Belgian trio of comedians THE PRIMITIVES, which made us laugh again and again during the whole festival. The Spanish ensemble Markeliñe triumphed in the engaged art category with their travelling poetic-visual theatre of masks ANDANTE commenting on the current issue of refugees.

We lived for three days with the slogan Let responsibility for freedom be well heard and these three days gave us energy during the long winter. Our hearts clang loud like bells until AMPLIFIER comes back again!

What are we cooking this year?